Over the weekend, after Israeli strikes on Syrian arms depots and chemical weapons caches (which were supported by some Syrians), the Stop the War Coalition’s Lindsey German penned an article condemning military action.

This would be a legitimate viewpoint were it not for Stop the War’s deafening silence over Assad’s murder of 70,000 Syrians over the past few years. Just a few weeks ago, German claimed the use of chemical weapons by Assad’s forces against civilians was a conspiracy “aimed at permanently weakening Iran and its allies.” German has previously backed the “right” of Russia and China to oppose UN resolutions that censure the Syrian regime.

In her latest piece, German wrote:

The bombing of Syria by Israel yesterday hit up to 12 targets near the capital, Damascus. It cannot be seen as anything other than an act of war against another country. It is clearly illegal under international law.

The background to the attack is increasing talk about Syria using chemical weapons and of the need for the ‘international community’ to intervene on this pretext. There are also signs that the government forces and Hezbollah are both making gains in the civil war … and this is making Israel act pre-emptively to strengthen the opposition.

Israel’s leaders are quick to preach about democracy but they are increasing the number of Jewish settlers in the West Bank and Jerusalem driving Palestinians off their land on a daily basis. Its aim in intervening in Syria is to weaken its government and hit at Iran and Hezbollah.

All of the rhetoric employed aims to paint the Syrian regime, and its patron Iran, as the victims of Western aggression. Meanwhile, the tens of thousands murdered and the millions made refugees by the Iran-Syrian alliance find no sympathy or support from this prominent ‘anti-war’ group.

Stop the War has a long history of supporting Iran and its allies, Syria and Hezbollah. At the Stop the War conference in 2007, one of the speakers was “Somaye Zadeh of Campaign Iran”, who “tried to counter the imperialist lies [about Iran].”

Somayeh Zadeh, whose real name is Somaye Bagherzadeh, is a vocal supporter of the Iranian regime. She regularly attends the Iranian-organised Al Quds March. 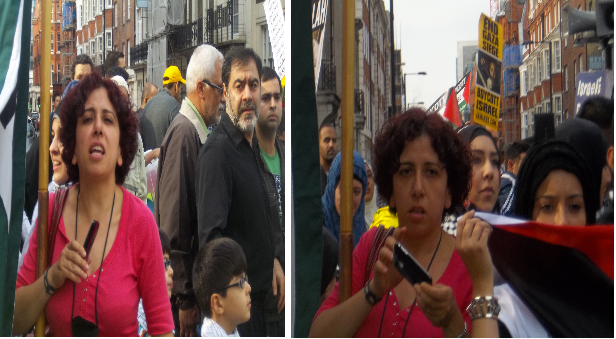 Zadeh has defended Iran’s murder of homosexuals on the grounds that Iran’s homosexuals are not harassed and are free as long as they undergo a sex change. She is a representative of CASMII, which Stand for Peace has revealed to maintain extremely close links to the Iranian regime.

In 2005, Stop the War told a group of Iranian refugees that Stop the War “can not allow any statement against the Islamic regime in Iran from the platform.”  In 2007, Stop the War published a piece praising Iranian President Ahmadinejad, written by far-Right activist Paul Craig Roberts, who claims Jews exert disproportionate influence within finance and the media. Stop the War, which portrays itself as a ‘coalition’, repeatedly refused to allow anti-Iranian regime group Hands Off the People of Iran to affiliate.  Stop the War official Andrew Burgin stated, “There are supporters of Ahmadinejad who we do not want to exclude.”

The campaign group has lost support from its former Muslim Brotherhood allies, who now oppose the Assad regime. In January, when Stop the War organised a demonstration “against intervention in Iran and Syria”, the speakers were all representatives from far-left groups. The usual Islamist organisations were conspicuously absent.