Until now, every year, the Young Socialists have held a summer fair at Burbage Primary School in Hackney, East London. For anyone who doesn’t know what the Young Socialists is, an image comes to mind – to me at least – of youthful zeal, confused notions of wealth redistribution, some healthy subversion, rhetorical commitment to social revolution, and perhaps the occasional unwashed dreadlocked chain-smoking thirty year old wearing clothes entirely made of hemp and smugness.

Usually, when one gathers together a group of iconoclasts such as these, it is mostly just another herd of freethinkers chanting about their individuality in unison. Annoying, reactionary and misguided; but mostly harmless. However, not this time.

The Young Socialists is the youth wing of the Workers Revolutionary Party (WRP). The WRP is a far-Left revolutionary organisation committed to overthrowing parliamentary democracy.

The supreme leader of the WRP was Gerry Healy, a man who kept the thousands of WRP members in his power by deploying the classic cult tactic of spreading paranoia and fear about everyone on the ‘outside’. The walls of the party headquarters in Clapham were lined with steel to block out supposed MI5 listening devices; a fleet of cars waited in the car park outside so that Workers Revolutionary Party militants could make a quick escape; and members had to cut off all ties with everyone except the chosen few.

Healy, thankfully now dead, was a convicted rapist and a brutal dictator. One WRP member, Kate Blakeney, spent so much time and money supporting the party that she could not afford to feed her own children. Blakeney described the intense control Healy and the Party demanded from its members:

“We were too busy, always busy, and could hope only to catch a few hours’ sleep.” One day Healy asked to meet her in his London flat. She went hoping to convince him to give her and her comrades in Oxford a respite from his demands: “[He] opened the door for me. He had been drinking. Something was all wrong. I pushed by his large body, sat down in the chair and started to make my report. Healy came to- wards me, was hovering over me. He was not listening to a word I was saying. He wanted only one thing from me, my sexual submission. For a moment, I just stared at him: fat, ugly, red- faced. Something inside of me snapped. I, my husband, my children, my comrades had sacri- ficed so much, had worked so hard for this…animal.”

As with many far-Left groups, all rights of the individual were sacrificed for the greater good of the ‘cause’. Outside the group’s headquarters in Derbyshire, the WRP banned all fraternisation with villagers over beers in the local pub. If members’ children cried outside the lecture hall, they were told to wait until the lecture had finished before finding and comforting them. As the journalist Nick Cohen notes in his book What’s Left?, “Nothing was to stand in the way of the preparations for the revolution.”

In the mid-1980s, twenty-six women accused the WRP leader of “cruel and systematic debauchery”. One of those attacked by Healy was the daughter of Healy’s oldest friends. She recounted how Healy had rewarded her parents’ loyalty by sleeping with her and beating her. She had been hurt so often she was close to being a cripple. In one particularly sickening case, Healy beat up a female WRP member, and a full-time organiser, because she wanted an abortion rather than to have his baby.[1]

The WRP isn’t just a rape cult; after Healy was expelled for his crimes, details of payments of over a million pounds to the WRP from repressive regimes and terrorist organisations were uncovered.

A report by the International Committee of the Fourth International concludes that for nearly a decade the WRP was a paid agent of murderous, oppressive foreign powers. This started in around 1975, when the first contact was made with the PLO, until 1983. Agreements with the dictators of Libya and Iraq provided substantial sums for the WRP in return for spying on and smearing British Jews and Arab dissidents.[2]

The WRP’s newspaper, News Line, served as a propaganda mouthpiece for these regimes. In one of its most shocking acts, the WRP’s News Line publicly supported the execution of 20 Iraqi leftists for the ‘crime’ of organising politically in the army, despite one of the men murdered having five months previously brought greetings to a WRP conference. The WRP’s leading committee decided, with only one dissenting vote, to approve the executions.

Following the exposure by the BBC programme ‘Money Line’ of the WRP’s connections to dictators abroad, the WRP published an furious anti-Jewish polemic in News Line, in which it was claimed that the Money Programme report was the result of ‘Zionist’ influence. Sean Matgamna, the Trotskyite theorist and an iconic figure on the Left, has opined: “The WRP ceased to be a political organisation and was merely a group paid for by Islamic regimes. They were spying on dissident Arabs and Jews for Gaddafi and Saddam, here in London.”[3]

After the Iranian revolution in 1979, the WRP gave up Marxist debate in favour of unconditional support for Khomeini’s Islamist regime – despite the latter’s murder of Jews and Iranian left-wing activists. The WRP even endorsed the murderous suppression of the Iranian USec group. In Zimbabwe, the nationalist Popular Front, and in particular Joshua Nkomo’s ZAPU, was given total support. As well as notoriously justifying the execution of Iraqi Communist Party members by the Ba’athist regime, WRP’s Newsline even published a brochure lionising the brutal dictator Saddam Hussein.

Not much has changed. The WRP’s website speaks warmly of Syrian demonstrations in favour of the brutal dictator Bashar Al-Assad, whose forces have killed tens of thousands of Syrian civilians within the last year. Additionally, the WRP has producedseveral sympathetic editorials towards the brutal dictatorship in North Korea.

In 2011, a Newsline editorial voiced support for Libyan dictator Colonel Gaddafi, even as he was murdering innocent Libyan civilians, stating: “We urge the Libyan masses and youth to take their stand alongside Colonel Gadaffi to defend the gains of the Libyan revolution, and to develop it. … Gadaffi died a hero, defending Libya…His heroism will inspire millions of Libyans, Arabs, workers and youth throughout the world to take up the struggle to smash imperialism.”

Twenty years after Healy courted murderous dictators and promoted anti-Jewish propaganda, the WRP and its youth wing, the Young Socialists, continue to voice support for despots and murderers. 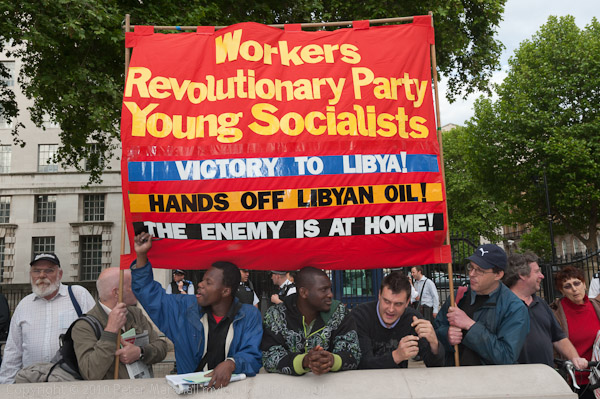 Young Socialists, the youth wing of the WRP, voice support for murderous dictator Colonel Gaddafi while Libyan civilians are being gunned down on the streets of Benghazi

Anti-racism groups in this country focus almost entirely on the far-Right. Here in the UK, the far-Right is disturbing, but impotent. Its supporters are football hooligans; not academics, journalists and politicians. Fascism as an ideology is espoused by no public figure or revered individual.

Meanwhile, groups such as the WRP, every bit as twisted and sinister as the far-Right groups, continue to infiltrate and influence parts of British society. Ken Livingstone, the previous Labour Mayor of London, was an unashamed supporter of the WRP andfrequently defends his ‘friend’, the violent rapist Gerry Healy. The BBC expose into Gaddafi’s support for the WRP also listed the Labour Herald, which Ken edited at the time, as a recipient of financial support from these murderous tyrants.

It is obvious that such groups must be monitored and fought, but few groups are doing so. It is thus a rather nice finish to tell you that having spoken with the school where the WRP was to hold its event, and having liaised with some extremely helpful local councillors and the Department for Education, the ‘summer fair’ for this violent rape cult has been stopped from going ahead, and will never be allowed to happen at the school again.

Hopefully all this has cost the WRP time and money. I doubt it’s tarnished their reputation – any group that supports the execution of their fellow leftists in return for a dictator’s cash hardly has to worry about such trivial things as reputation, principles or morality. But then again, maybe that is what the far-left is all about.
1 – see ‘Healyites Blow Up’, Workers Vanguard No. 391, 15 November 1985